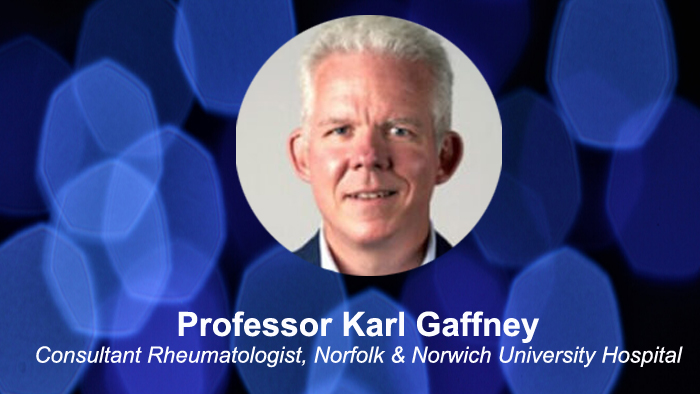 Professor Karl Gaffney (MB, BCh, BAO Hons, FRCPI, FRCP) has been a Consultant Rheumatologist in Norwich since 1995 where he is service lead for axial
spondyloarthritis (including ankylosing spondylitis), adolescent rheumatology and osteoporosis. He is an Honorary Professor at Norwich Medical School, chair of the medical advisory board, National Axial Spondyloarthritis Society (www.nass.co.uk), founder member, treasurer and chair-elect of BRITSpA www.britspa.co.uk), chair of the British Society for Rheumatology (BSR) axial SpA Biologics Guidelines Committee, member of the National Early Inflammatory Arthritis Project Working Group, vice-chair of the BSR Heberden Committee, co-director and founder of the East of England and London Spondyloarthritis Academy (www.rheumatologyevents.org), and an invited member of the Assessment of Spondyloarthritis International Society www.asas-group.org.

He has also represented the BSR and NASS at the National Institute for Health and Care Excellence (NICE) appraisal of biological therapies since 2007. He was Rheumatology Service Director from 2008 until 2016, Director of Postgraduate Education in Norwich between 1999 and 2005, and Director of Rheumatology Training, Eastern Deanery between 2001 and 2007.

With NASS he has co-developed primary and secondary care educational programmes for healthcare professionals. These initiatives have been awarded national and European awards for excellence in healthcare communication. He is leading the NASS National Gold Standard Delay to Diagnosis project, launched at the House of Commons in July 2020 www.nass.co.uk/get-involved/gold-standard. His current research interests include epidemiology, dose optimisation and extra-articular manifestations of axial SpA. He oversees a large clinical trials programme and collaborates with other national and international centres. He has  published extensively and has been an invited speaker at national and international meetings. 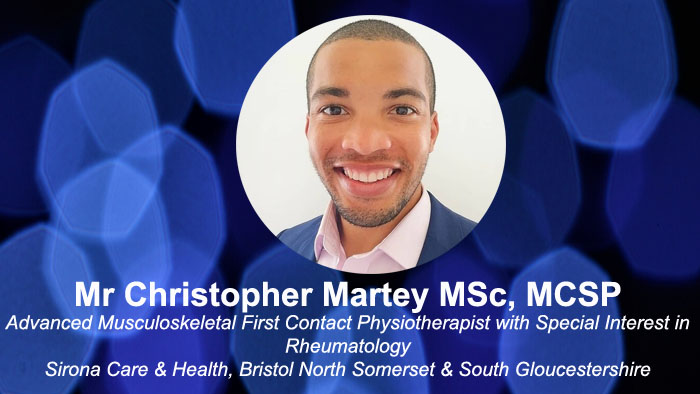 Chris graduated from the University of East Anglia’s pre-registration Physiotherapy Masters cohort after completing an undergraduate degree in Sport and Exercise Science. He undertook his junior NHS Physiotherapy rotations in Buckinghamshire Healthcare Trust and in Bath at the Royal United Hospital. He later took up a Senior Physiotherapist post in a specialist tertiary care Rheumatology setting at the Royal National Hospital for Rheumatic Diseases, Bath. Here, Chris honed his skills and found his love of Rheumatology. He worked with inpatient and outpatient Rheumatology patients and was a lead on their prestigious Axial Spondyloarthritis 2-week residential programme, working alongside the multi-disciplinary team.

Chris now works as an Advanced Musculoskeletal First Contact Physiotherapist (FCP) in primary care in the South West of England and has a passion for health advocacy, leadership and policy. He sits on the Board of Trustees for the Arthritis and Musculoskeletal Alliance (ARMA, http://arma.uk.net/), which is an umbrella body bringing together patient organisations and professional bodies representing the breadth of musculoskeletal health.

Chris has maintained a specialist interest in Rheumatology, particularly Spondyloarthritis, and has presented nationally on this topic as well as published in this field. Chris has been an elected Executive Committee member on the British Society for Spondyloarthritis (BRITSpA, https://britspa.co.uk/) since 2019; a charity of healthcare professionals dedicated to advancing knowledge and treatment of Spondyloarthritis, and his research interests lie within the non-pharmacological management of Rheumatic and Musculoskeletal Diseases (RMDs). Chris is keen to advance and contribute to research priorities within RMDs and he is an active member on Versus Arthritis’ Adult Inflammatory Arthritis Research Advisory Group 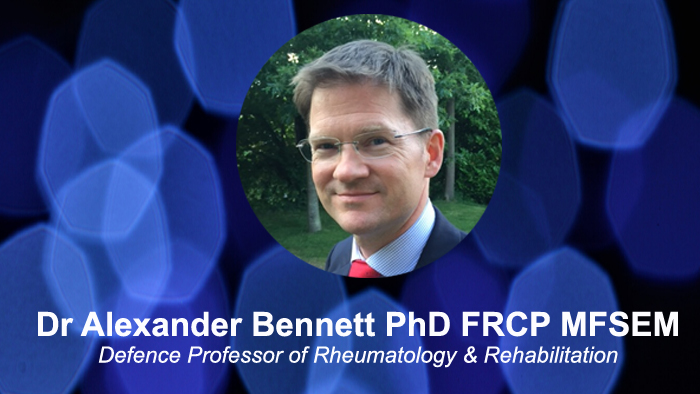 He has a keen interest in research as well as clinical aspects of Rheumatology and Rehabilitation and particularly in axial Spondyloarthritis.  He has published widely in Rheumatology, in particular in the fields of early diagnosis and prognosis in seronegative inflammatory arthritis/spondylitis. He has lectured on many occasions at national, European and American Rheumatology conferences.

He was appointed Defence Professor of Rheumatology & Rehabilitation in March 2017 and oversees all research at the Academic Department of Military Rehabilitation, which focuses on musculoskeletal injury and disease and trauma rehabilitation and outcomes.